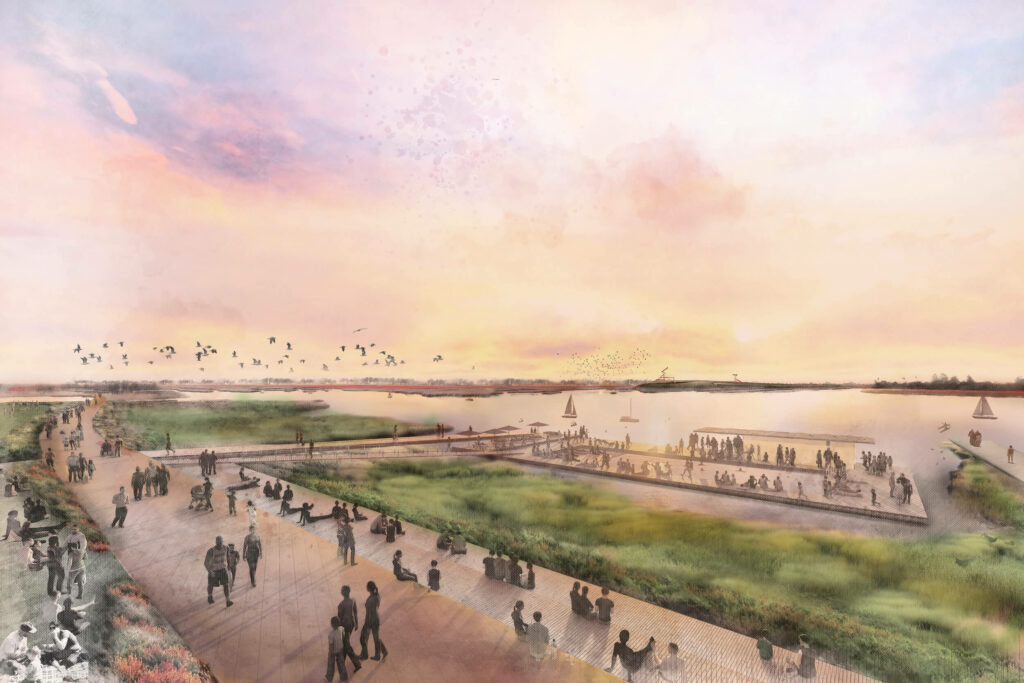 ABOUT The Estuary Commons

To protect local neighborhoods and restore native habitats, All Bay Collective is rethinking the shoreline around San Leandro Bay with the creation of Estuary Commons. Through the construction of ponds, landforms, and expanded streams, the communities of Deep East Oakland, Alameda, and San Leandro will not only be able to adapt to sea-level rise and groundwater flooding, but will also have a network of flourishing greenways to enjoy for generations to come. ABC has worked closely with eight community organizations from East Oakland to move the communities from the margins to the center of the design and planning process.

Our site extends from the center of historic San Leandro Bay to approximately one mile inland from Oakland and Alameda’s current shorelines. Since the 1870s, this area has been extensively altered by cutting and filling activities, when a 30-year project cut a tidal canal between San Leandro Bay and the old Oakland Harbor, isolating Alameda from the mainland. More than four square miles of coastal wetlands in Oakland were filled with urban rubble or dredge sand. During this filling process, the channels of several new creeks were created (Lion Creek and Elmhurst Creek) or relocated (San Leandro Creek). Arrowhead Marsh extends into San Leandro Bay from the mouth of San Leandro Creek and serves as an important habitat for two federally-listed wetland species – the Salt Marsh Harvest Mouse and the Ridgeway’s Rail. The area surrounding San Leandro Bay is divided by jurisdictional and infrastructural boundaries but shares the risks of sea level rise and groundwater flooding. San Leandro Bay connects the Oakland Coliseum area, City of Alameda (main island), Bay Farm Island, Oakland International Airport, and the San Leandro watershed.

The complex mix of urban, ecological, social, and economic challenges confronting San Leandro Bay are both confounding and inspiring. ABC’s vision is deeply informed by the history of this estuarine environment, the urgent challenges facing the communities that surround it, and the longer-term risks we can now only glimpse. Designing for resilience requires us to think differently about how resources and places are shared, and we must recalibrate how communities, government agencies, and private entities co-create their socioeconomic and physical environments. Working together with stakeholders and community organizations through a process of learning and co-creation led us to Estuary Commons.

The idea of a commons derives from a rich political and urban history. It joins people and place through shared management of resources for the benefit of all. A commons is at once the public process of governance and civic life and the spaces that bring us together. ABC envisions Estuary Commons as a network of communities joined in mutual obligation to share and manage the resources of a working urban landscape. Locals have been referring to San Leandro Bay as “The Estuary” for years, and Estuary Commons reaffirms this community-conceived identity and speaks to the shared place, process, and path forward that will drive resilient outcomes for generations.

Our study area’s major assets include Oakland Coliseum, Oracle Arena, Coliseum BART Station, North Field of Oakland International Airport, Interstate 880, and Capitol Corridor Amtrak and Union Pacific Railroad lines. Many miles of road infrastructure already experience flooding during high-tide and king-tide events. Research on flooding at the Oakland Coliseum site reveals rising sea levels are likely to cause problems first through the lower reaches of local creeks and then spreading out of the creek channels near I-880. In addition, groundwater mapping reveals the Oakland Coliseum site and land to the north and south have a shallow water table, increasing the risk of groundwater flooding.

The presence of more socially and economically vulnerable residents in our study area heightens the importance of developing resilient concepts that give all communities the opportunity to thrive in the San Leandro Bay-Coliseum area. The 2010 Census recorded approximately 50,000 people living in the study area, about half in Oakland and half in Alameda. People who live in the adjacent Oakland neighborhoods are predominately African-American and Latino, and people living in Alameda are predominantly Asian-American and Caucasian. In terms of pollution burden and socioeconomic vulnerability, the State of California ranks the Oakland portion of the study area in the 90th percentile, downtown Alameda neighborhoods below the 50th percentile, and Bay Farm Island below the 10th percentile.

Educate and inspire local resilience planning with fun and easy tools. We will host “train the trainer” sessions with community and agency representatives on our community toolkit. This includes (1) In It Together, a sea-level rise adaptation game that brings stakeholders together around a map of San Leandro Bay to explore possible resilience actions and weigh their trade-offs; (2) the Community Resilience Investment Decision-Making tool, which enables stakeholders to evaluate adaptation strategies based on community-voiced criteria; and (3) an Equity Checklist, which neighborhood advocates can reference to ensure investments deliver community benefits and address historic disparities and inequities.

Learn from each other through a peer-to-peer best practice network. ABC will also hold a series of webinars to share best practices in local resilience, bringing together advocates from communities boldly addressing similar challenges. The first is scheduled with developers of a Hip-Hop Museum in South Bronx.Put the Community first and support developing a Community Benefits District (and beyond) in East Oakland. We recommend an existing (or new) non-profit organization be identified to administer a Community Benefits District, which would provide a community-driven framework to implement local resilience strategies and support the health, wealth, and stability of its residents. It would give East Oakland a “seat at the table” in policy conversations, and could possibly be one layer in a multi-layered community benefits structure. An immediate next step would be to leverage the community-driven planning process for the East Oakland Neighborhood Initiative to further explore this CBD structure.

Teach the next generation of Bay Area leaders through continued academic-community engagements. To enhance learning outcomes and bring the studio to the street (and vice versa), we look to pursue more direct, community-based educational opportunities. Kristina Hill (UCB) and Janette Kim (CCA) plan to focus one of their studios next year on helping residents build resilience in East Oakland. UCB CED will also explore developing an online portal for residents to express their ideas, priorities, and challenges pertaining to resilience.