NY Post: A city plan to temporarily destroy a beloved Manhattan park in a bid to prevent future flooding is so hated, hundreds of activists “buried” the proposal in a mock funeral Saturday.

“Bury the plan, not the park!” was the battle cry from the more than 300 protesters who turned out to save East River Park — which the city intends to cover in up to 10 feet of fill to create a barrier against rising waters.

The highlight of the noontime march, which kicked off in Tompkins Square Park, was the “internment” of the city’s proposal, which activists covered in compost in front of a cardboard gravestone as a bagpiper sounded a mournful tune.

“We tried to convey to city officials our opposition, our disappointment,” trumpeted protester Howard Brandstein, executive director of the Sixth Street Community Center. “We thought maybe with the death of the plan, we can connect with them emotionally.”

A year ago, the city did an about face on a flood protection plan for lower Manhattan, infuriating residents with the hated proposal to cover up East River Park.

The proposal by the city’s Department of Design and Construction would, if approved, take 3.5 years to complete and begin in the spring of 2020.

Construction would close the park — which runs from East 12th Street to Montgomery Street — during the work, remove nearly 1,000 trees and trash recently upgraded park features, including a refurbished track and new soccer field. Read more>> 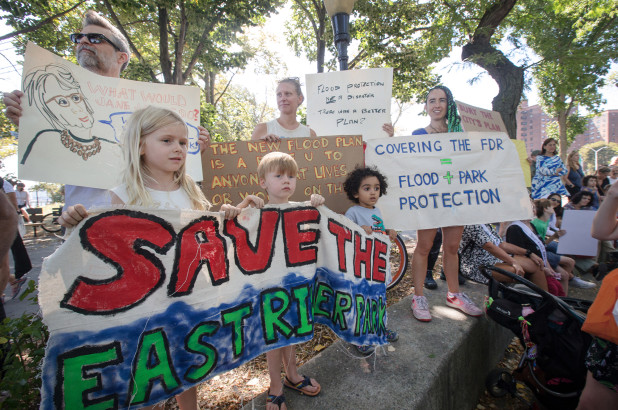