Hudson Reporter: Programming space, an elevated outlook, and native plantings are all possibilities for the redesign of Harborside Park as part of the city’s Rebuild By Design project.

The project team announced three design concepts for Harborside Park at two public workshops last week, all of which provide play space for children, greenery, and views of the waterfront.

The Rebuild By Design project aims to protect the city from flooding caused by storm surges such as Hurricane Sandy that flooded the mile-square city in 2012 damaging homes and businesses.

The project, funded with $230 million from the U.S. Department of Housing and Urban Development, calls for construction of flood-resistant structures and storm-water control systems to protect areas vulnerable to flooding along Weehawken Cove to the north, and in and around NJ Transit’s Hoboken rail yard to the south. The structures include flood walls and soft landscaping such as berms and levees.

According to Mayor Ravi Bhalla, the new park will expand the existing waterfront park and add two additional acres of open space; the parks amenities and elevated features will fit in with the natural landscape of the new park.

“This will be one of the first parks in the country to combine a natural park with innovative above-ground flood infrastructure to protect from coastal flooding,” he said.

Dennis Reinknecht of the New Jersey Department of Environmental Protection said, “We are going to build a storm surge strategy in that park to prevent the storm surge from the river coming through that area. But for the 99.9 percent of the time when it’s not activated for the storm, it’s a beautiful place and a beautiful public space that you are proud of and want to spend your time in.”

The three concept designs are The Bloom, The Meadow, and The Ridge.

Each concept integrates a “central spine” which extends from 16th and Park Avenue to 15th and Garden Streets as part of the northern resist alignment.

This spine is composed of two technical components, a T resist structure up to 12 feet high and two retractable flood gates which will be deployed along tracks in the ground to protect the city during major storms.

The Bloom concept separates the park into four quadrants with a central shaded outlook and raised walkways. 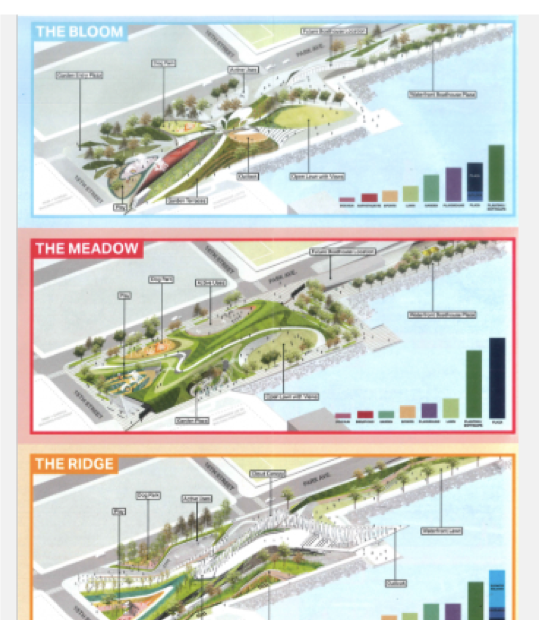