COVID KILLED NEW YORK’S COASTAL RESILIENCE BILL. PEOPLE OF COLOR COULD BEAR MUCH OF THE COST

Fierce winds pelted Phipps’ two-story home on New York City’s Rockaway Peninsula that day in 2012, and sea water flooded the first floor, where she ran her daycare center. The damage was so extensive, the city condemned the building, forcing Phipps and her family to live in a hotel for several years. Then in 2017, Phipps’ husband died unexpectedly, leaving her with a more than $200,000 mortgage that drained her savings as she struggled to reestablish her livelihood.

“I don’t know what I’m going to do—I’m 66 years old, I have a heart condition,” Phipps said. “I’ve had one thing after another.”

Sandy killed 44 people and ultimately cost the city an estimated $19 billion in damages and lost economic activity, officials reported, with over 69,000 residences damaged and thousands of New Yorkers like Phipps forced to find new homes.

As climate change fuels stronger and more frequent storms, environmental advocates have pointed to the devastation left in Sandy’s wake as a prime example of why fortifying America’s coastal cities against natural disasters and sea level rise is more important now than ever. It’s also why activists are now criticizing New York Gov. Andrew Cuomo, who announced late last month that the state was withdrawing a ballot initiative that, if approved by voters in November, would have provided vital funding for efforts meant to prevent the kind of damage Sandy inflicted.

The Restore Mother Nature Bond Act, which was approved by lawmakers in the state budget earlier this year, would have issued $3 billion in state bonds to help fund projects specifically geared toward reducing New York’s flood risk, including building artificial reefs in the Long Island Sound. But because of the pandemic, the state now faces a $30 billion budget deficit over the next two years. And in a press briefing in June, Cuomo said it wouldn’t be “financially prudent” to pursue the bond act until next year.

The bill was widely supported by legislators and advocacy groups alike, many of whom expressed shock and disappointment at the postponement. The wait, they argued, could ultimately cost New York more money in the long run, as storms get worse, and delaying climate action could further harm the state’s communities of color, with broader consequences across the nation.

Already, federal forecasters are predicting an extremely active hurricane season with up to 25 named storms, compared to 12 in an average year. And several reports have marked Northeastern states as some of the most vulnerable to coastal storms and rising seas in the coming decades.

Under the current projections for warming, New York’s coast is likely to experience 2 feet of sea level rise by 2045, according to a 2018 report from the Union of Concerned Scientists. The report also noted that for every dollar the United States invests in mitigation, $6 could be saved in future disaster costs. And a major study released last month found that the world is facing a potential 20 percent loss in overall GDP by 2100 as a result of sea level rise, if governments don’t invest more in flood defense. Read more>> 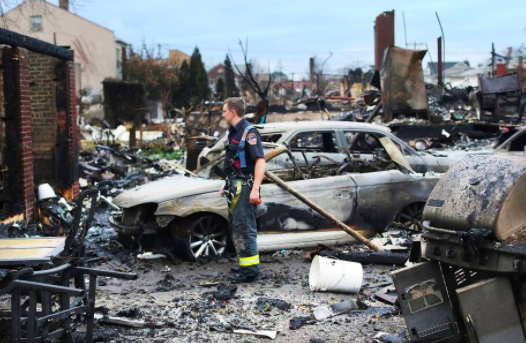