In the past 10 years, every county in New York State was impacted by major flooding; more than half were affected five or more times, a total of 19 disaster declarations totaling $37 billion in State and Federal Funds.

A Resilient Infrastructure Fund will connect planning and implementation to ensure new infrastructure reduce flooding, enhance ecology and provide social and economic benefits to the State.

According to the report, “Resilient Infrastructure for New York State: We Cannot Wait Any Longer,” New York State is already feeling the effects of climate change. The report outlines impact of flooding events in the past decade, and proposes the creation of a “Resilient Infrastructure Fund which includes a transparent and equitable approach to address climate impacts that communities throughout New York are already experiencing.

The new study finds that since the beginning of 2011, every county in New York State has had disaster declarations due to flooding—and 50 percent of counties have been inundated more than five times. Disaster declarations for these 19 events totaled $37 billion in state and federal aid for recovery efforts. With ninety percent of New York State’s population residing in waterfront communities, communities from Niagara County to Staten Island are experiencing the social and physical disruptions that flooding leaves behind. According to NYSERDA, by mid-century economic impacts from climate change in New York state will cost $10 billion annually.

The report calls to create a “Resilient Infrastructure Fund” to address the physical and social vulnerabilities exposed by increased flooding and calls for the infrastructure to maximize benefits to ecology, public health, and social resilience while reducing flood risk to transportation and other critical infrastructure, housing, and main streets. The proposed program also supports comprehensive planning to ensure that communities understand their long-term risks so they can direct growth to higher ground and support a comprehensive buy-out program for those areas which we cannot protect and instead need to move out of harms’ way.

“Every county in New York State is already experiencing extreme storms,” said Amy Chester, Managing Director of Rebuild by Design. “An investment in resilient Infrastructure is a triple win for our state – It reduces risk, enhances communities and increases economic activity. We cannot wait any longer to address this issue.”

It includes a three-stage comprehensive planning process to ensure inclusivity and cooperation between municipalities to support infrastructure projects that can demonstrate effective interventions which can be replicated in other areas of the state.

“A Resilient Infrastructure Fund turns the fragmented and often too re-active way of flood response into a comprehensive, inclusive and future-proof pro-active protective and preventive approach saving lives and preventing the loss of valuable assets. It catalyzes local planning and community understanding of what is needed to address flooding,” said Henk Ovink, Special Envoy for International Water Affairs for the Kingdom of the Netherlands and founder of Rebuild by Design. “It will not only save the state valuable tax dollars, it’s investments have a return in more value of land, quality of life and the environment.”

The recommended evaluation criteria for projects supported by this fund includes: prioritizing the most physically and socially vulnerable; qualitative and quantitative ecological, social, and public health outcomes; and using science-based and forward-looking risk approaches.

The Resilient Infrastructure Fund will support projects which already have demonstrated effectiveness including resilient green infrastructure (including conserving natural shorelines and back bay areas, restoring and protecting existing wetlands, green roofs and rain gardens, and creating porous surfaces from asphalt), gray infrastructure (such as widening culverts, installing flood plain benches, cisterns and storage tanks), and –building on the State’s successful post-Sandy voluntary Buyout and Acquisitionprogram — the development of a permanent program to help residents move out of harm’s way. The Fund should not consist of any existing transportation and/or infrastructure revenue sources.

The report recommends two methods to finance this program. The first is a “bond act,” on the 2020 ballot which would ask voters to support bonding for capital projects for this specific purpose. Ballot initiatives have been successful in Miami, San Francisco and Houston raising money for resilient infrastructure.

The second is a two-percent surcharge on certain types of Property & Casualty insurance. Goldman Sachs estimates, capital capacity over 10 years would be ~$17.6 billion (according to 2017 insurance data). The average auto or homeowners insurance would increase by $2 per month. This surcharge is progressive, because higher-income people insure more expensive items, and lower-income people insure less. This would be the first time in the nation that a surcharge would be leveraged to address future climate events.

According to an economic analysis prepared for Rebuild by Design, AECOM found that the cost of inaction for New York State for the next decade could be at least $55 billion. Meanwhile, it is expected that every $1 billion in resilient infrastructure spending creates an average of ~15,500 direct jobs and ~21,300 indirect jobs, multiplying the benefits.

“A big investment in resilient infrastructure would create tens of thousands of good paying, middle class jobs for New Yorkers,” said Gary LaBarbra, President of the Building and Construction Trades Council “When New Yorkers have good paying jobs, their income is invested right back into the economy of New York State multiplying the benefits.”

The Resilient Infrastructure Fund builds on the work that New York State is already doing to address climate change challenges which include the New York Communities Rising Reconstruction Program, Climate Smart Communities, and the nation-leading Climate Leadership and Community Protection Act. It will expand on this summer’s Lake Ontario Resiliency and Economic Development Initiative (REDI) initiative by creating an opportunity for all communities to create truly comprehensive and collaborative visions for the future, and can help implement the newly announced Revive Mother Nature by advancing projects that create climate resilience for communities while also restoring wildlife and aquatic habitat, and improving water quality.

The report was authored by Rebuild by Design, the organization who organized the Hurricane Sandy Design Competition in collaboration with US Housing and Urban Development (HUD), which led to over $1 billion of federal funds invested in large-scale, multi-benefit infrastructure projects for the Hurricane Sandy affected region. In New York State, funded projects include The BIG U in Lower Manhattan, and Living Breakwaters, on Staten Island.

You can read the full report here. 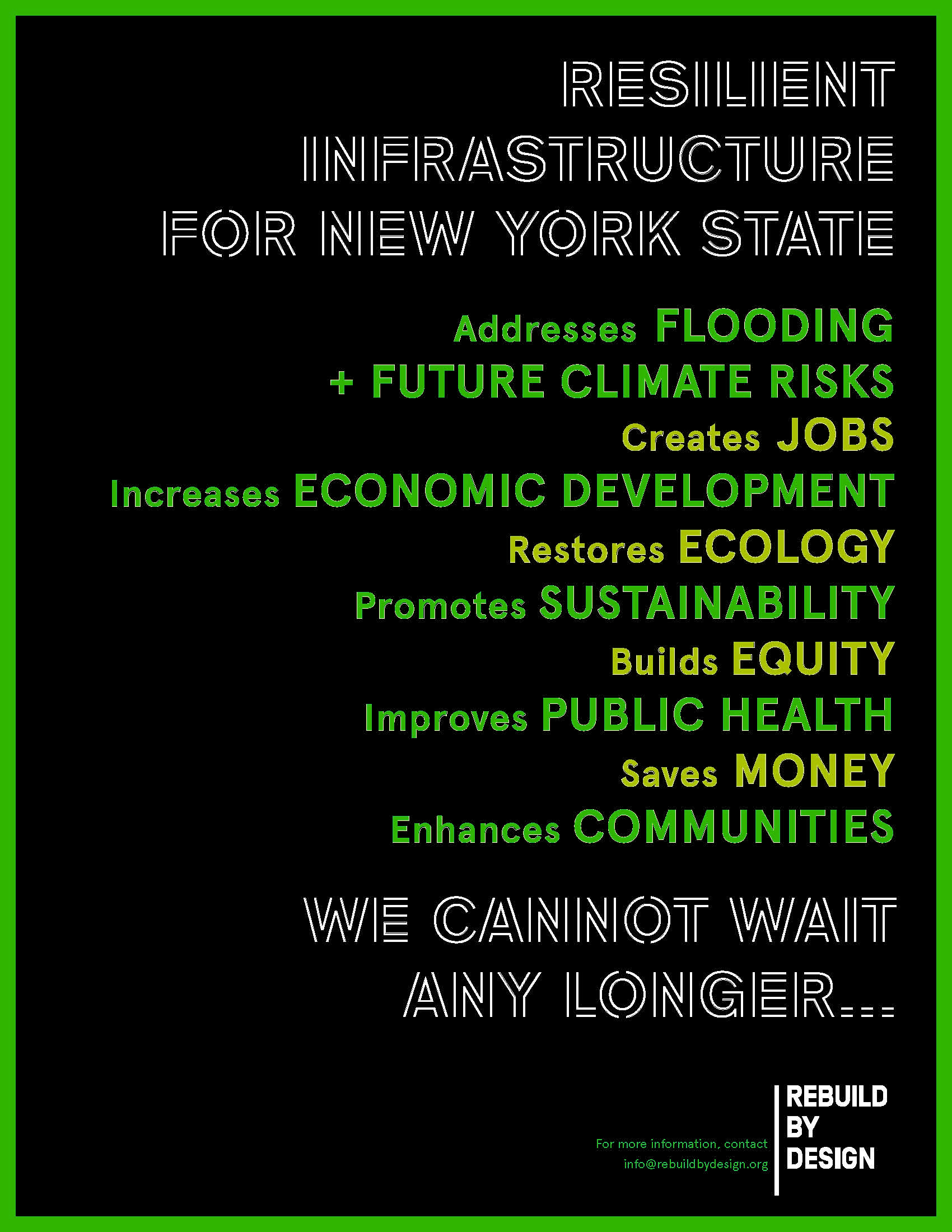