Some Ponderosa Mobile Home Park residents remain uncertain about the ongoing construction project that’s meant to redevelop the community into a neighborhood of affordable, fixed-foundation homes.

As Boulder replaces infrastructure in the manufactured home community it purchased in 2017, the neighborhood is in a bit of disarray. With construction comes challenges, and residents continue to worry about what the future holds

“We’ve been dealing with a lot of upheaval and change,” longtime resident Tina Boguhn said.

Until the city officially annexed the property in October 2019, Ponderosa, at 4475 Broadway in north Boulder, was a county enclave, surrounded by the city adjacent to West Fourmile Canyon Creek. The city purchased the property about two years prior with plans to “preserve long-term affordability, annex the property into city limits, replace outdated infrastructure and reduce flood risk to the community,” according to its website. It’s in a limited partnership with Boulder Housing Partners, starting with the city owning 99% of the project and BHP owning 1%.

Because the city does not traditionally own and operate affordable neighborhoods such as Ponderosa, once the project has progressed, the city would be looking for a partner like BHP to assume ownership of the land and maintenance of the common areas, Crystal Launder, who serves as the Ponderosa project manager with Boulder’s Housing and Human Services department, said.

Ponderosa will one day contain fixed-foundation homes built by Flatirons Habitat for Humanity. The approved final plan calls for 73 homes. While current residents can stay where they are, they’re offered first dibs on the Habitat homes should they be interested.

The city funded the redevelopment project in a variety of ways, including with $75,625 in Colorado Department of Local Affairs resilience planning grant funding, $3.6 million in federal community block grant funding for infrastructure replacement and $600,000 from Boulder’s affordable housing fund for property purchase. It received in-kind support from Rebuild by Design for a three-day design workshop.

Currently, the city is in the midst of the infrastructure replacement piece of the project. Among other things, it has paved roads, replaced the sewer and water and will this summer work with Xcel Energy to replace the gas lines.

Some residents had to move locations within the park since the city built detention ponds to help with flood mitigation. Others are living without decks or fences or with partially built sidewalks or inconsistent parking while the work is ongoing. The neighborhood’s beloved memorial garden no longer exists, but the city has said it intends to relocate it with the original community wishing well. Read more>> 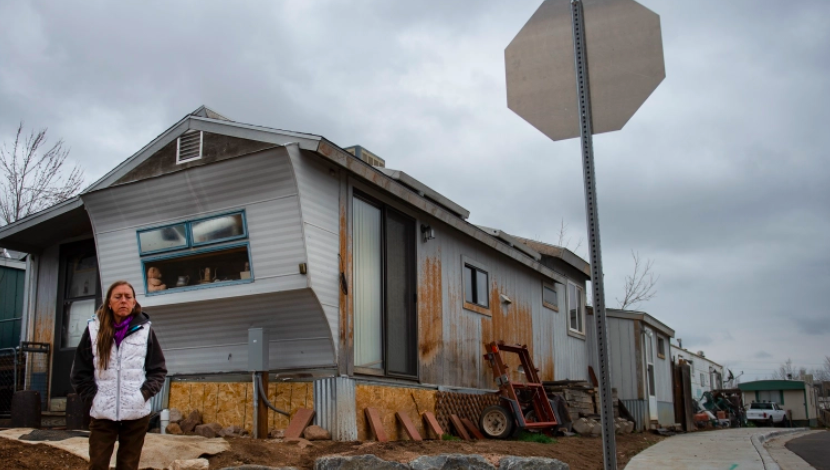