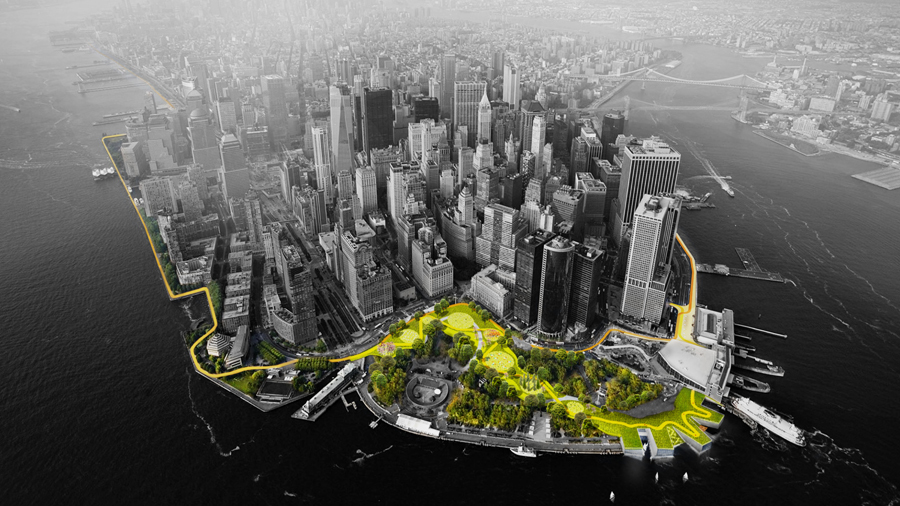 PROJECT PAGES: THE BIG U

The low-lying topography of Lower Manhattan from West 57th St down to The Battery, and up to East 42nd St is home to approximately 220,000 residents and is the core of a $500 billion business sector that influences the world’s economy. Hurricane Sandy devastated not only the Financial District, but also 95,000 low-income, elderly, and disabled city residents. Infrastructure within the 10-mile perimeter was damaged or destroyed, transportation and communication were cut off, and thousands sat without power or running water.

In collaboration with New York City, The BIG U proposal was developed to protect Lower Manhattan from floodwater, storms, and other impacts of a changing climate. The BIG U calls for a protective system around the low-lying topography of Manhattan beginning at West 57th Street, going down to The Battery, and then back up to East 42nd Street.

The proposal was conceived as 10 continuous miles of protection tailored to respond to individual neighborhood typology as well as community-desired amenities. The proposal breaks the area into compartments: East River Park; Two Bridges and Chinatown; and Brooklyn Bridge to The Battery. Like the hull of a ship, each can provide a flood-protection zone, providing separate opportunities for integrated social and community planning processes for each. Each compartment comprises a physically separate flood-protection zone, isolated from flooding in the other zones, but each equally a field for integrated social and community planning. The compartments work in concert to protect and enhance the city, but each compartment’s proposal is designed to stand on its own.

EAST RIVER PARK: A proposed Bridging Berm would both protect the area from storm surges and rising sea levels, and offer waterfront access for relaxation, socializing, and enjoying river vistas by providing pleasant, accessible routes over the highway into the park. Additionally, salt-tolerant trees and plants would provide a resilient urban habitat.

TWO BRIDGES AND CHINATOWN: Deployable walls attached to the underside of an elevated highway can flip down to mitigate flooding. Decorated by neighborhood artists, the panels would create an inviting ceiling when not in use, while integrated lighting would transform a currently menacing area into a safe community destination.

BROOKLYN BRIDGE TO THE BATTERY: The Battery Berm weaves an elevated path with a series of upland knolls to form unique landscapes. The plan envisioned transforming the existing Coast Guard building into a new maritime museum or environmental education facility featuring a “Reverse Aquarium” where visitors can observe tidal variations and sea level rise.

The vision for the BIG U that began with the Rebuild by Design Hurricane Sandy Competition has given way to the planning, design, and implementation of various sections of this continuous flood infrastructure spanning multiple community boards. The funded plans span from East 25th Street on the East Side to Chambers Street on the West Side, for which sections have been named: East Side Coastal Resiliency (ESCR), Brooklyn Bridge Montgomery Coastal Resilience (BMCR), Lower Manhattan Coastal Resilience (LMCR), and Battery Park City Resilience Projects.

The ESCR project will reduce coastal flood risk on Manhattan’s East Side through an integrated 2.4-mile system of raised parkland, floodwalls, berms, and movable floodgates. The project broke ground in Fall 2020 and will be completed by 2026. In July 2022, Mayor Adams opened the new Asser Levy Playground, which was rebuilt with resilient materials and now features 320 feet of new floodwall and a 79-foot sliding floodgate. Site restoration of the northern portion of Stuyvesant Cove Park will be completed in the fall. Ongoing construction for East River Park includes sewer upgrades, floodwall development, and soil stabilization.

In the Two Bridges neighborhood of Manhattan, the BMCR project will install a combination of flood walls and deployable flip-up barriers along the waterfront from the Brooklyn Bridge to Montgomery Street, to protect the neighborhood from projected 100-year storm surge in the 2050s while maintaining access and visibility to the waterfront. The final design is complete and the project team is currently in the procurement phase; construction is anticipated to begin in fall 2022 and be completed in four years.

The Battery Coastal Resilience project will rebuild and elevate the wharf promenade in The Battery by approximately six feet to protect it from projected sea level rise into the year 2100. The proposed design will incorporate sustainable features, including salt-tolerant trees and plantings, an enhanced drainage system, and permeable pavers, to help The Battery withstand and recover from future flooding. The project is currently in the design phase and procurement is projected to begin fall 2022. Construction is slated to start in spring 2023 and to be completed by winter 2024.

Finally, in December 2021 the NYC Economic Development Corporation and Mayor’s Office of Climate Resiliency released the Financial District and Seaport Climate Resilience Master Plan, which envisions a multilevel waterfront that extends and elevates the shoreline of the East River between The Battery and the Brooklyn Bridge. The design also includes floodwalls, green infrastructure, and coves for ecological protection and public education. The City is working to gather public feedback on the design concept and to secure State and Federal permits.