THE BIG U 10-YEAR UPDATE

The vision for the BIG U that began with the Rebuild by Design competition has given way to the planning, design, and implementation of various sections of this continuous flood infrastructure spanning multiple community boards. The funded plans span from East 25th Street on the East Side to Chambers Street on the West Side, for which sections have been named: East Side Coastal Resiliency (ESCR), Brooklyn Bridge Montgomery Coastal Resilience (BMCR), Lower Manhattan Coastal Resilience (LMCR), and Battery Park City Resilience Projects. Additionally, in some areas there is interim flood protection using Tiger Dams and HESCO barriers to address flooding in Lower Manhattan before construction is complete. There are no current plans for permanent flood protection to the floodplain above Chambers Street on the West Side.

In the Two Bridges neighborhood of Manhattan, the Brooklyn Bridge Montgomery Coastal Resilience (BMCR) project will install a combination of flood walls and deployable flip-up barriers along the waterfront from the Brooklyn Bridge to Montgomery Street, to protect the neighborhood from projected 100-year storm surge in the 2050s, while maintaining access and visibility to the waterfront. The deployable barriers will be permanent infrastructure, hidden in the ground until they are flipped up in the event of a storm. The project will also integrate drainage improvements and public space amenities like open-air seating, fitness equipment, and athletic courts. READ MORE HERE>>

The Battery Coastal Resilience project will rebuild and elevate the wharf promenade in The Battery by approximately six feet to protect it from projected sea level rise into the year 2100. The project is intended to ensure that when complete the LMCR projects will operate as a unified system of coastal flood risk reduction, connecting to the Battery Park City Resilience project on the west end and the Financial District and Seaport Climate Resilience Master Plan on the east end. The proposed design will incorporate sustainable features, including salt-tolerant trees and plantings, an enhanced drainage system, and permeable pavers, to help The Battery withstand and recover from future flooding. READ MORE HERE>>

In response to the 2019 Lower Manhattan Climate Resilience Study, in December 2021, the NYC Economic Development Corporation (EDC) and Mayor’s Office of Climate Resiliency (MOCR) released the Financial District and Seaport Climate Resilience Master Plan, a “blueprint for comprehensive flood defense infrastructure to protect Lower Manhattan from the urgent threat of climate change,” including rising sea levels and coastal storms. Developed after months of engagement with community members and with local stakeholders through the Climate Coalition for Lower Manhattan, the Plan is projected to cost $5-7 billion and to take 15-20 years to complete. READ MORE HERE>> 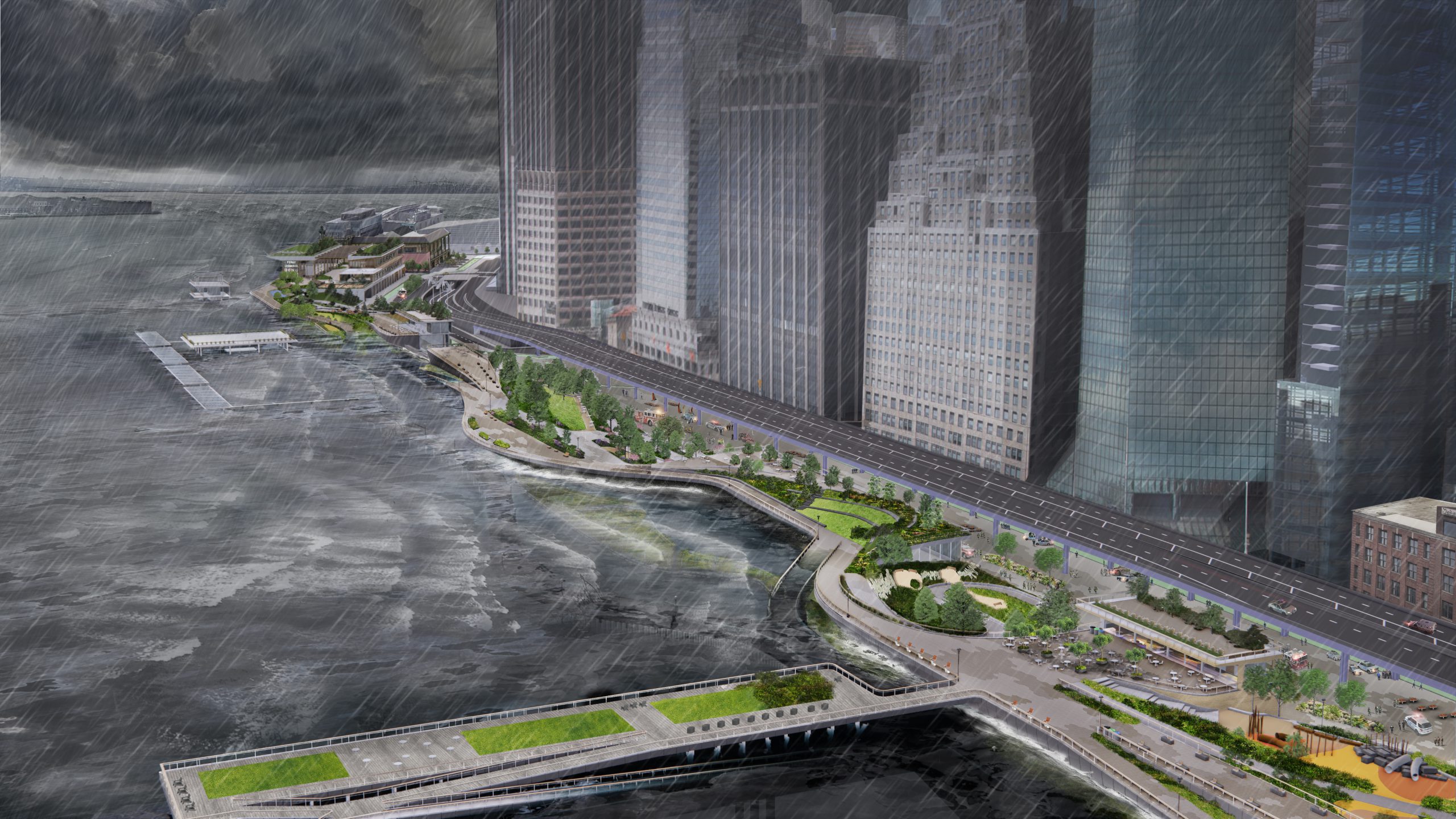