AECOM analyzed the benefits of the Environmental Bond Act by assessing the economic impact of the anticipated investments and researching comparable projects and programs. Review of benefit-cost analyses found that benefits often outweigh costs for similar types of investments. The analysis estimates that the New York State Environmental Bond Act has the potential to:

The jobs report follows Rebuild by Design’s report “We Cannot Wait Any Longer,” which shows that over the last ten years, every county in New York State has been impacted by severe storms and flooding, tropical storms, or hurricanes. More than half were affected by five or more disaster events. The major federal disaster declarations for these counties totaled $37.3 billion in federal aid for recovery efforts.

“AECOM analyzed the economic impacts of the New York State Environmental Bond Act and the benefits that the associated spending would provide both in the near and long-term. Our findings are clear – the Environmental Bond Act would be a useful stimulus, with the potential to support thousands of jobs in numerous sectors while also spurring long-term economic growth and protecting New York’s environment for future generations,” said Garrett Harper, Managing Principal, Economics + Advisory with AECOM. “By approving the Environmental Bond Act, the Governor and Legislature became leaders in acknowledging that investments in the environment also benefit the economy.”

“Communities in New York State are already suffering from climate change. Past disasters, such as Hurricane Sandy, and our recent experience with Covid-19, have laid bare the reality that these events disproportionately hurt the most vulnerable populations,” said Amy Chester, Managing Director of Rebuild by Design. “We need to pass the Bond Act and give communities the resources they need to build infrastructure that will address climate change and put New York on a path to recovery.”

“With a battered economy caused by the pandemic and with millions of New Yorkers unemployed, New York needs to capitalize on opportunities that will restart its economy and create thousands of good-paying, union jobs to get New Yorkers back to work. The Environmental Bond Act does exactly that while also protecting our environment, improving our water quality, reducing flood risks, and mitigating climate change,” said Vincent Albanese, Director of Policy and Public Affairs, New York State Laborers’ Organizing Fund. “This report proves that the Bond Act will benefit communities all across New York, from Buffalo to Long Island. Let’s put New Yorkers back to work and reinstate the Bond Act.”

“The return on investment is clear – by building green infrastructure, the $3 billion NYS Environmental Bond Act will support $6.7 billion in direct spending and create 65,000 jobs. Following the economic impact of the pandemic, we cannot ignore this opportunity to put people back to work and create more opportunities for MWBEs. Moreover, this report reaffirms that addressing climate change will help us build a better New York for all. We must reinstate the Environmental Bond Act in 2021 – it will be a victory for our state, our residents and our economy,” said Carlo A. Scissura, President and CEO, New York Building Congress.

“Improving New York’s water quality and reducing flood risks are essential to the safety of all New Yorkers. The NYS Environmental Bond Act would create thousands of jobs for New Yorkers to protect our water quality, reduce flood risks, and make our communities safer and healthier. That’s why we strongly support the NYS Environmental Bond Act,” said John Murphy, International Representative of the United Association of Plumbers, Pipe Fitters and Sprinkler Fitters in NYS. “We want all New York communities to have better water quality and that’s why we need to pass the Bond Act.”

“The Environmental Bond Act is a great opportunity to invest in our environment and invest in good jobs and New York should do both,” said Daniel J. McGraw President of the New York State Conference of Operating Engineers.

Ross J. Pepe, President of the Construction Industry Council of Westchester & Hudson Valley, Inc., said, “We have witnessed Gov. Andrew Cuomo’s historic clean water grants program pay huge dividends in communities across the state, both in terms of environmental protections and quality-of-life improvements. These public monies spent for the public good is the fuel that drives the economic engine to stimulate employment with living-wage jobs and long-lasting improvements to our public facilities and infrastructure. The Bond Act is a powerful resource to help state and local governments meet their obligations to their citizens to protect the environment, create jobs and advance our quality of life. Now is the time to double our efforts to continue this momentum. Let’s work together by reinstating the Bond Act and passing it this November.”

“The Environmental Bond Act is critical in providing necessary infrastructure for fostering economic development in the region. The Act will help put New Yorker’s back to work by creating thousands of jobs while helping to protect our environment. This Act is crucial in the economic recovery for the Hudson Valley and New York State,” said Mike Oates, President & CEO, Hudson Valley Economic Development Corporation.

“Congratulations and thanks to AECOM and Rebuild By Design for this important report confirming the $3 billion Environmental Bond Act would protect clean water, reduce pollution, and protect New Yorkers from climate change while also jumpstarting New York’s economy and creating tens of thousands of local jobs,” said Carter Strickland, New York State Director for The Trust for Public Land. “These exciting findings further confirm what past studies, including those done by The Trust for Public Land, have shown: environmental programs and investments provide powerful and wide-reaching economic benefits across the state and pay back investments many times over. This is why 175 conservation, labor, and health organizations have joined together, as part of the New Yorkers for Clean Water and Jobs coalition, to urge federal and state leaders to prioritize environmental funding as a key pathway for New York’s public health and economic recovery.”

AECOM is the world’s premier infrastructure consulting firm, delivering professional services throughout the project lifecycle – from planning, design and engineering to program and construction management. On projects spanning transportation, buildings, water, energy and the environment, our public- and private-sector clients trust us to solve their most complex challenges. Our teams are driven by a common purpose to deliver a better world through our unrivaled technical expertise and innovation, a culture of equity, diversity and inclusion, and a commitment to environmental, social and governance priorities. AECOM is a Fortune 500 firm and its Professional Services business had revenue of $13.2 billion in fiscal year 2020. See how we deliver what others can only imagine at aecom.com and @AECOM.

About Rebuild by Design

Rebuild by Design convenes a mix of sectors – including government, business, non-profit, and community organizations – to gain a better understanding of how overlapping environmental and human-made vulnerabilities leave cities and regions at risk. Rebuild’s core belief is that through collaboration our communities can grow stronger and better prepared to stand up to whatever challenges tomorrow brings. Created in response to Hurricane Sandy, Rebuild by Design catalyzes climate-forward infrastructure to address climate challenges in communities throughout the United States and around the world. In the New York City region, the Rebuild process has led to a government investment of over $2.5 billion for resilient infrastructure projects to address climate change, and laid the groundwork for the creation of a Resilient Infrastructure Fund for New York State which led to the creation of the 2020 Environmental Bond Act. 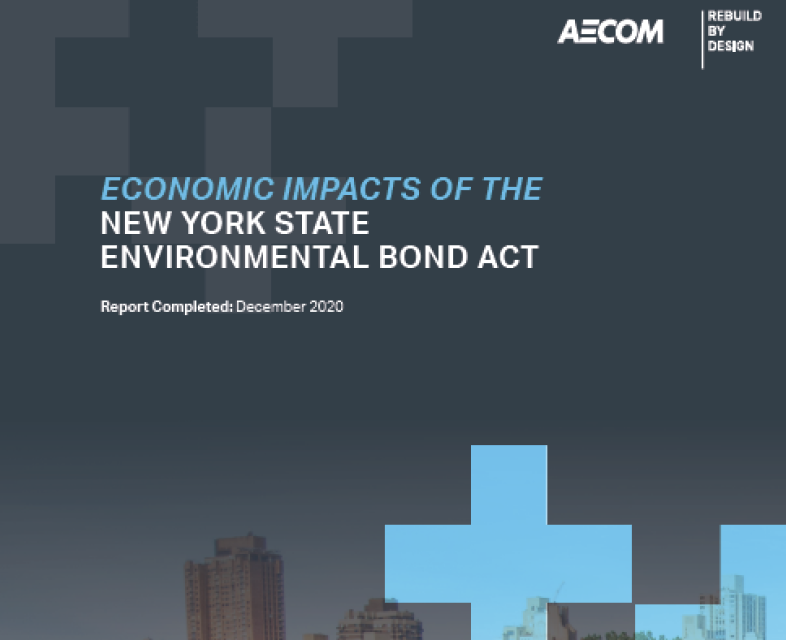