WHAT DOES IT MEAN TO SAVE A NEIGHBORHOOD?

Replace me with the text

NY Times: The day after the storm swallowed her neighborhood, Nancy Ortiz woke before dawn to buy ice. It was 2012, and Hurricane Sandy had reclaimed Lower Manhattan for Mother Nature. Making landfall near Atlantic City, it swept north, ravaging the New Jersey coast, destroying thousands of homes and inundating New York City with waves as high as 14 feet.

Sandy shuttered Wall Street, rattling global markets, and for a moment the storm restored Manhattan’s early 17th-century coastline. A brackish murk of waist-high water submerged all the landfill that humans had dredged, salvaged and shipped to widen the island, and that now supported the Franklin D. Roosevelt Drive. It also swamped a large cluster of public housing developments and a beloved but bedraggled ribbon of greenery built by Robert Moses during the 1930s called East River Park.

In the dark, Ms. Ortiz tiptoed through a shambles of overturned cars and shattered glass to her Acura TSX. The storm had knocked out electricity to 250,000 people in the area, including those in Vladeck Houses, the oldest public housing project on the Lower East Side. As president of the Vladeck tenants’ association, Ms. Ortiz knew there were many diabetic residents who would need to keep their insulin cold. She figured help wasn’t likely to come quickly; for public housing residents, it rarely did. So she got into her car and headed north, some 15 miles, all the way into the Bronx, before finding a store selling 10-pound bags of ice. Into the night she navigated Vladeck’s dark stairwells, knocking on doors.

Though Ms. Ortiz’s neighborhood was one of the worst hit by Sandy, the storm caused tens of billions of dollars in damage all across the region and killed more than 100 people. It was a sign of things to come and begged for a federal response. After surveying the wreckage, President Barack Obama turned to Shaun Donovan, his secretary of housing and urban development, who came up with a novel federal competition called Rebuild by Design. Teams of architects and engineers were invited to conceive creative flood-protection proposals in collaboration with members of the affected communities.

Several dozen proposals surfaced, and in 2014, seven winners were selected. By far the largest grant went to a segment of a wider Lower Manhattan resiliency plan called the BIG U. It aimed to protect residents in the public housing developments, including Vladeck. Officials named the segment the East Side Coastal Resiliency project. Read more>> 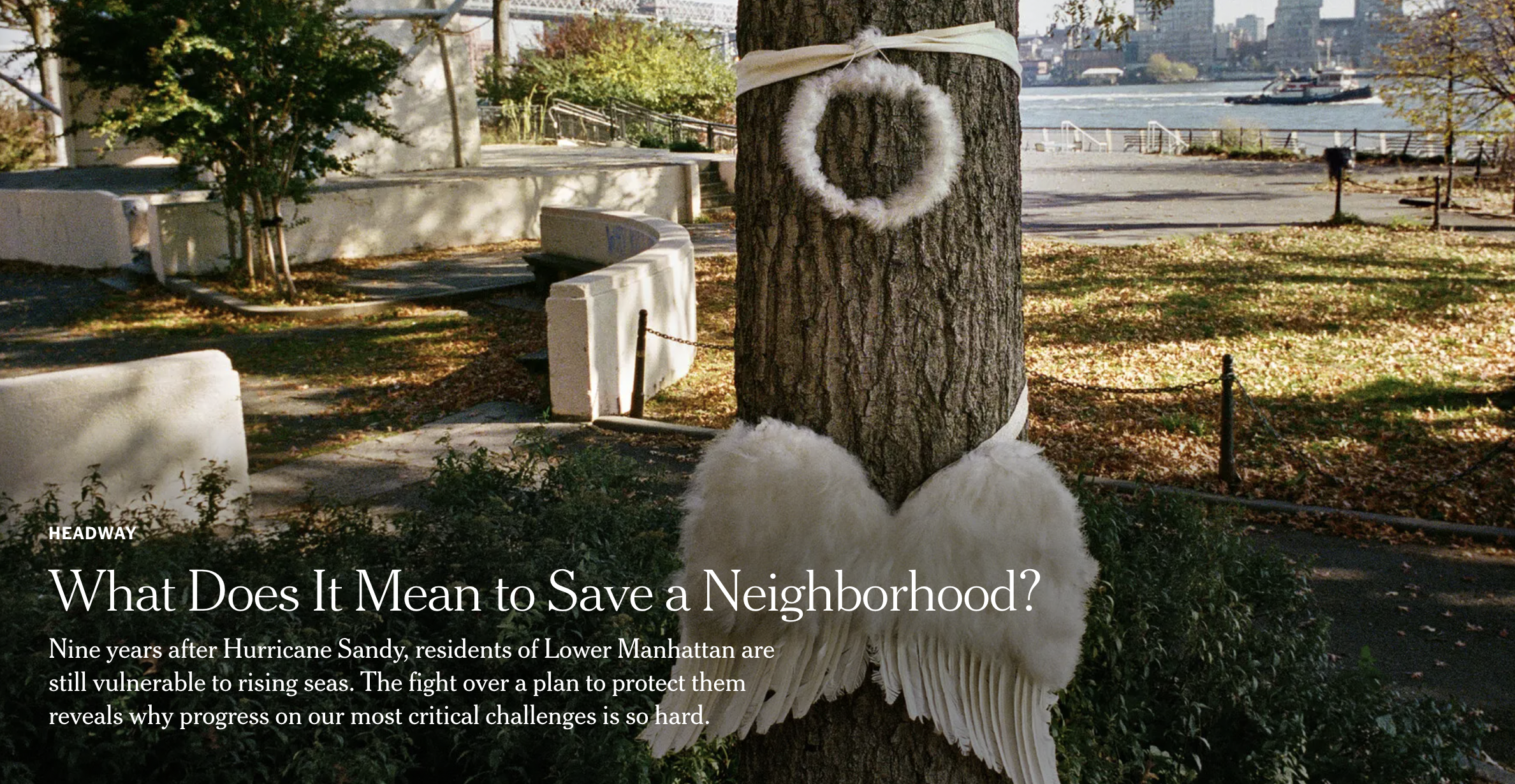