Grist: Michael Berkowitz is a student of disaster, and a guru on how cities weather them. As the former executive director of the nonprofit consultancy 100 Resilient Cities, and now as founding principal at the similar Resilient Cities Catalyst, he has worked with dozens of local governments around the world to plan for hurricanes, droughts, earthquakes, terrorist attacks, mass shootings, disease outbreaks, and other social shocks.

Now, as a global catastrophe unfolds in the form of coronavirus, Berkowitz is trying to think ahead as he shelters at home in New York City. He’s looking for signs of how communities will survive the aftermath, as well as for opportunities to strengthen resilience now in the face of social and economic disruption.

“The key is to think about linking various objectives together,” he said over the phone. “How can one particular intervention succeed in strengthening a city across a lot of different areas?”

Berkowitz, who also served as deputy commissioner of New York City’s office of emergency management in the aftermath of the September 11 terrorist attacks and has done global risk management at Deutsche Bank, spoke with CityLab over the phone on Thursday. This interview has been edited and condensed for clarity.

First: Define this concept of resilience in cities. What is it, and how do you build it?

Urban resilience is the ability or capacity of a city to survive and thrive in face of disaster, any kind of disaster. It turns out that the capacities that cities — or states, or nations — need to survive and thrive in the face of all these different threats are pretty broad. It includes good infrastructure that promotes mobility and sustainable transportation. It’s also cohesive communities where neighbors check in on neighbors. It’s a diverse economy with a strong middle-class jobs base. It’s good governance with multiple stakeholders at a decision-making table. All of those things help communities overcome whatever the next crisis might be.

To build resilience, the trick is linking different goals together. When you’re doing economic development, how can you also make yourself better protected for floods? When thinking about mobility, how can you increase biodiversity or reduce exposure to extreme heat? When thinking about governance and community engagement, how do you build trust and confidence in elected officials so that in crisis situations people listen to and follow the advice of elected leaders? Read more>> 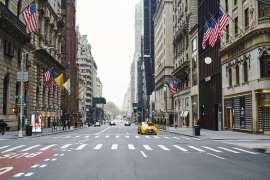