The Patch: Hizzoner took an afternoon stroll through East River Park Friday, after bailing on a meeting with local council members over a major resiliency plan to bury and rebuild the park to protect from the impacts of climate change.

Patch spotted Mayor Bill de Blasio speaking to a local in East River Park about the $1.45 billion flood protection project planned for the east side.

“I can’t talk to a journalist. I’m in the middle of doing this,” de Blasio said.

“Sometimes you gotta take no for an answer,” he said, shuffling northbound from the Williamsburg Bridge with top Department of Design and Construction officials Lorraine Grillo and Jamie Torres-Springer, before security personnel stepped in.

A briefing was previously scheduled Friday with de Blasio and three local council members — Carlina Rivera, Keith Powers, and Margaret Chin — who represent parts of the project area, according to Rivera.

“Today the Mayor’s Office cancelled an important negotiations meetings over [the project known as] ESCR so that they could take a long overdue tour of East River Park,” said Rivera.

“We could have used the City’s undivided attention on this resiliency project — the first one in the city’s history — a year ago when the agencies suddenly changed the design without community input. We were promised an update months ago and yet again, they delay critical answers,” she said.

City Hall said the briefing with council members was postponed so they’d be prepared for local pols’ unanswered questions about the project, which would bury the East River Park with about eight feet of soil to build a flood wall of sorts. Locals have scrutinized the plan for months since it requires the park to shutter for three-and-a-half years of construction work.

“The Mayor knows how important the East Side Coastal Resilience project is to protect the homes of 110,000 New Yorkers,” mayoral rep Seth Stein said.

“This tour of the promenade today, accompanied by DDC and other City officials, is an essential part of his hands-on approach to addressing the needs of the neighborhood,” Stein said. Read more>> 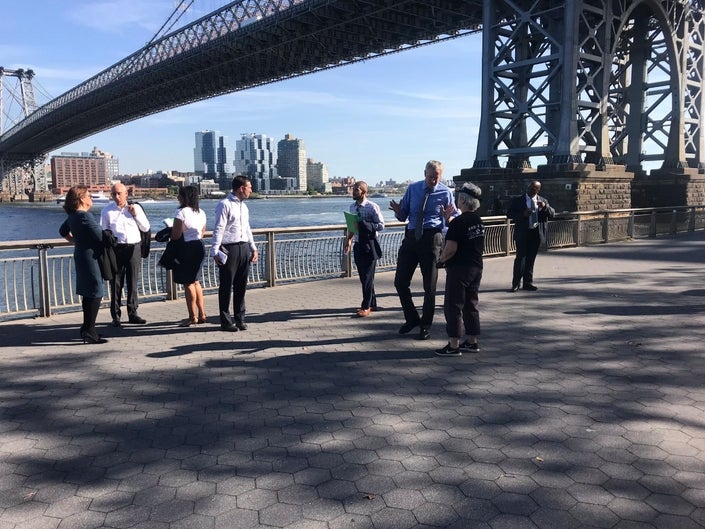