CNA Luxury: Saving the planet. It’s not just the subject of passionate political debate. It’s at the heart of a growing number of museum exhibitions this year, including the works of old masters and exhibits built with high-tech innovations, designed to inspire artistic appreciation and a desire to respond to environmental challenges.

Among the shows: The much-anticipated Hudson Rising at the New-York Historical Society; Nature’s Nation: American Art and Environment, in Salem, Massachusetts, which looks at 300 years of American art through an environmental lens; Documenting Change: Our Climate (Past, Present and Future) in Boulder, Colorado. And more.

“There’s a crescendo of interest in both art that is itself about the environment and art that is self-consciously environmental, and I think that’s entirely understandable and good, because it draws attention to these dire situations we’re facing,” said Karl Kusserow, curator of American Art at the Princeton University Art Museum.

Kusserow is a co-curator of Nature’s Nation: American Art and Environment, which includes paintings, artefacts, sculpture, prints, photographs and decorative art. It started at the Princeton University Art Museum and is now showing at the Peabody Essex Museum in Salem until May 5. It will end at the Crystal Bridges Museum of American Art in Bentonville, Arkansas, from May 25 to Sep 9. Read More>>

“The impetus grew out of my concern for climate change, and my recognition and realisation that I could bridge my concerns as a citizen with my work as a scholar,” said Kusserow, who spent seven years developing the show with Alan Braddock, associate professor of Art History and American Studies at the College of William & Mary.

The goal of the exhibition, he said, is to view famous and lesser-known art through ecological glasses: how the environment is represented in images and how humans’ place in the world is depicted.

“It asks people to think in new ways about iconic works,” Kusserow said. For example, the famous 19th-century painting by Albert Bierstadt, Bridal Veil Falls, Yosemite – a lush painting of one of the national park’s waterfalls – is hung alongside a work by artist Valerie Hegarty from 2007, Fallen Bierstadt, which shows the same painting askew, burned and ripped. 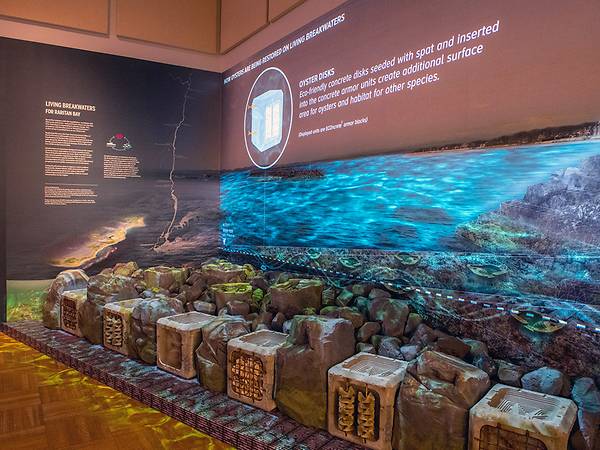