The Dirt: To protect against future super storms and long-term sea level rise, New York City proposed creating a set of landscaped berms around the southern tip of Manhattan, a plan deemed the “Big U.” The city secured some $330 million from the U.S. department of housing and urban development (HUD)’s Rebuild by Design competition in 2014 to kick start the project. After four years of intensive community engagement, the city suddenly switched gears last fall, throwing out those plans in favor of raising the first proposed segment of the Big U — the waterfront park between 25th street and Montgomery Street on the east side — by 10 feet. Instead of berms, the existing 60-acre East River Park will be buried under landfill and its new higher edge will become a wall holding back the East River, which is expected to rise with the Altantic Ocean by 2.5 feet by 2050.

In conjunction with retractable flood gates set within neighborhoods, the park will provide flood protections up to 16 feet above current sea level, protecting 100,000 residents along the east side and the Franklin Delano Roosevelt (FDR) Drive.

At a Dumbarton Oaks symposium on landscape, sport, and environment, landscape architect Simon David, ASLA, a founder of OSD|Outside and former director of the project for Bjarke Ingels Group (BIG), explained the facets of the $1.5 billion project, which he said provides both “recreation and resilience in the era of climate change.”

The East River Park revamp is a central component of the East Side Coastal Resilience Project (ESCR), just one piece of what will be wall, gate, and park infrastructure that run down the east side, around the financial district, and up the west side of Manhattan. The east side design team includes Bjarke Ingels Group (BIG), AKRF, One Architecture, and Mathews Nielsen Landscape Architects (MNLA).

The area near this first segment has an interesting history. Famous (and infamous) city builder Robert Moses cleared the area of “slums” in order to create the FDR Drive (then the East River Drive) highway and to its west, affordable housing complexes. To the east of the drive, the shoreline was built up over landfill into the East River, creating new park space and sports fields for the complexes’ residents, who now cross a less-than-ideal caged bridge over FDR Drive to get there.

David called the park itself a “gallery of fences,” separating the various sports areas, with few pleasant green spaces. Salt water intrusion has killed off a number of the trees. And the ones that remain are “reaching the end of their lives.” Read more>> 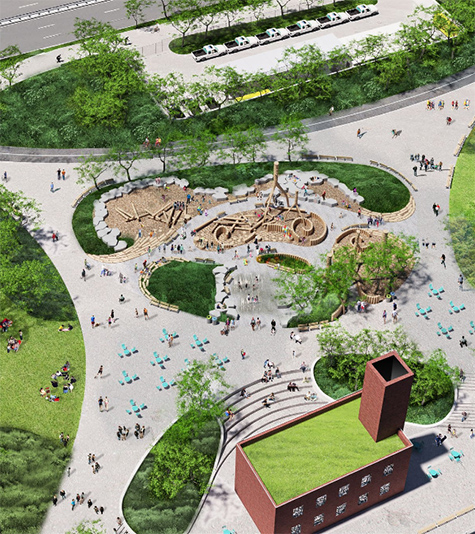