Resilient by Design 2-Year Anniversary Webinar Series: 2 Years Later Designer Roundtable – What is this Remarkable Moment We Find Ourselves In?

2 Years Later Designer Roundtable – What is this Remarkable Moment We Find Ourselves In?

The Role of Design in Climate Adaptation & Resiliency

Hosted via Zoom Webinars. Click here to register.(link is external)

Educated at Wellesley College and Harvard Graduate School of Design, Cathy Simon’s 45-year career has focused on transformative design at all scales. Her award-winning work comprises design for higher and secondary education including the Haas School of Business’s new Connie and Kevin Chou Hall, public and commercial buildings such as Genentech’s 250,000 sf B35 and the Bay Area Metro Center, reinvented historic structures notably SF’s Curran Theater and Pfleuger’s 140 New Montgomery, waterfront projects—the Ferry Building and Pier 1–and urban design of numerous postindustrial Bay Area waterfront sites: Treasure Island and the SF Giants’ Mission Rock development. In 2015, she was the William A. Bernoudy Architect in Residence at the American Academy of Rome, and taught architecture at both Stanford and UC Berkeley. In 1985 she founded SMWM, and in 2008 the firm merged with Perkins + Will. She served as a design-oriented Research Advisor to RbD Bay Area Challenge. Cathy is currently writing a book whose working title is Active Boundaries: Art, Architecture and Culture at the Water.

Claire Weisz FAIA is a founding partner of WXY, known for their innovative approach to community, public space, structures, and cities. Claire was awarded the Medal of Honor from AIANY in 2018 and was honored with the Women in Architecture Award by Architectural Record in 2019. WXY is globally recognized for its place-based approach to architecture, urban design, and planning, and has played a vital role in design thinking around resiliency. In 2019 Fast Company named WXY one of the World’s Most Innovative Architecture Firms.

Josiah Cain serves as Sherwood’s Director of Innovation. His deep sustainable design experience and multi-disciplinary approach provide insight and opportunities for optimization of the urban fabric through the integration of ecological systems with site and structure. His informed drive for enhanced site performance and multi-disciplinary integration has led to first of a kind permits in many jurisdictions, advancing design, policy, and technical implementation of rain harvesting, graywater, blackwater reuse, living roofs and walls, native plants, sustainable stormwater management, food systems, and materials.

In addition to directing Sherwood’s Innovation Program, Josiah is an acting Principal and provides strategic design leadership on influential projects throughout the firm. His projects target resilience and resource optimization and include the design of on-site wastewater treatment wetlands, water reuse systems for a high-density corporate campus, and green infrastructure applications at the California Academy of Sciences, Google and Microsoft Campuses, University of California, and Duke University.

Kevin Conger is one of the three founders of CMG Landscape Architecture in San Francisco, a studio of 40 designers working to increase social and ecological wellbeing through artful design.

Kevin promotes democratic public space and urban ecology as the cornerstones for social and ecological resilience in projects that include the San Francisco Waterfront Resilience Program, which is adapting 7 ½ miles of urban waterfront for sea level rise in 2100; the regeneration of the defunct military bases at Treasure Island and Hunters Point; Bay Meadows racetrack redevelopment; the redesign of Market Street to remove cars and improve transit and public spaces; the expansion of Moscone Convention Center; and the community based Yerba Buena Streetlife Plan.  Kevin’s built designs create memorable experiences through materiality, meaning and form, and include the Rooftop Sculpture Garden at SFMOMA, the Commons at Headlands Center for the Arts, the Crack Garden, Parkmobiles, and more.  These projects, large and small, combine purpose and beauty to create landscapes that make our cities better places.

Kevin earned a BSLA from Cal Poly SLO in 1988, an MLA from RISD in 1994, has taught at RISD, BAC, UC Berkeley, and is active at Cal Poly.  He is a Fellow of ASLA and lectures often about the work of CMG, democratic public space, ecology and design.

Marcel Wilson is a licensed landscape architect and the founder and design director of Bionic based in San Francisco, Ca. As Design Director, Marcel leads the design of all of the firm’s projects with an inventive spirit and personal investment. He is an agile and inventive designer, a skilled and inspiring communicator, and a talented collaborator and strategist on projects at all scales and levels of complexity.

As a designer he is distinguished as a creative force in complex landscape projects through his broad expertise in landscape technology which ranges from large scale infrastructure systems to micro scale material applications. His portfolio of design and management experience includes waterfronts, infrastructure, universities, high-rise construction, landscapes on structure, and post-industrial sites. He has led the design and management of landscape projects in the United States and Asia.

Bionic has risen to the cutting edge of the profession through significant commissions for LinkedIn, Adobe, Google, Genentech, and Zeiss. At the city scale Marcel is leading the design of the public realm for the City of Sunnyvale and the India Basin Waterfront in San Francisco. The firm has won multiple international design competitions including Fort Mason Center Public Realm, the Adobe Creek Bridge in Palo Alto, and The Resilient By Design Bay Area Challenge.

Under Marcel’s leadership Bionic has been distinguished by numerous publications including Fast Company, Landscape Architecture Magazine, Dwell, SF Chronicle, and the Harvard Design Magazine. The firm has been awarded numerous awards for its built and theoretical work by the Boston, Chicago, and California AIA, and The American Society of Landscape Architects. Bionic was nominated for the Cooper Hewitt Smithsonian National Design Award.

Wilson has worked for the New York City Department of Parks and Recreation and was formerly a principal at Hargreaves Associates. He received his bachelors of science in landscape architecture from Colorado State University, and a Masters of Landscape Architecture with distinction from the Harvard Graduate School of Design where he was awarded the prestigious Weidenman Prize for Design Excellence.

Veronica is a registered landscape architect and architectural designer at James Corner Field Operations in the San Francisco office, where she is leading the work on the Oakland A’s Ballpark and Master Plan. She is also working on the San Pedro Waterfront, a 40-acre mixed-use development along one mile of the port of Los Angeles’ waterfront, including 20 acres of parks, lawns, plazas, and gardens.

Previously, Veronica led the work on Resilient by Design, in which she developed proposals to holistically address the various connectivity, equity, and environmental issues and create a more resilient South Bay. She was a core team member of the design team and oversaw construction administration for the Public Square in Cleveland, Ohio, a 6-acre transformation of roadways and hardscape, into a unified urban park at the heart of downtown Cleveland. Veronica’s prior experience includes the Tsim Sha Tsui Waterfront and Salisbury Gardens in Hong Kong, Navy Yards Central Green in Philadelphia, and the Presidio Tunnel Tops project in San Francisco.

Having worked in Puerto Rico, Berlin and New York City, Veronica brings a broad international perspective of culture, ingenuity, and creativity. Veronica is a remarkably creative designer with a notable attention to detail, focusing on the continuity of projects from concept to construction. 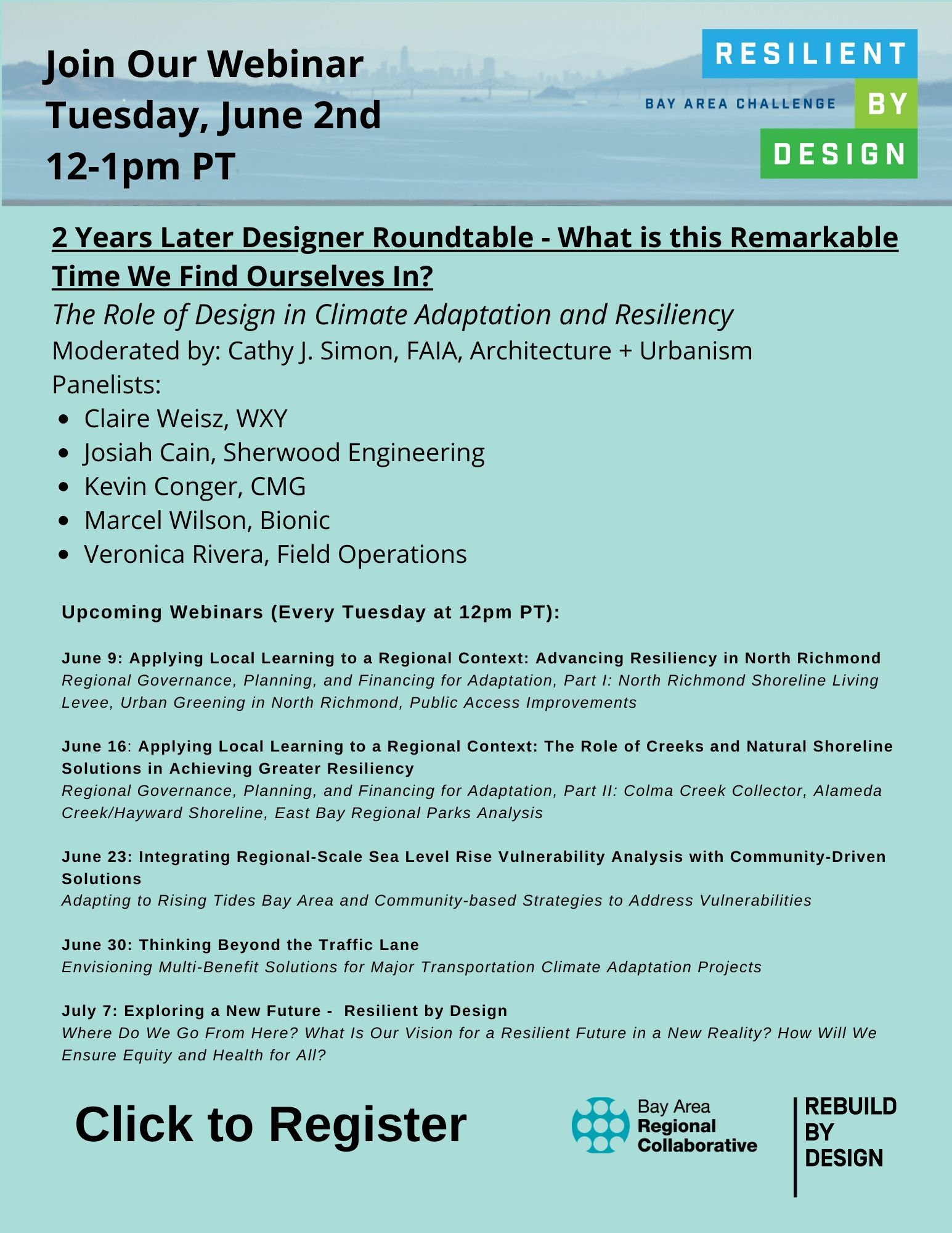