Building rules and processes are designed to protect health, safety and the environment, but they can also govern design choices. Even as technology, engineering, and architectural innovations advance our goals, policies and procedural barriers often make advancement in building design difficult, time consuming, or costly to implement. In tandem with the City of Los Angeles’ resilience and sustainability goals, Rebuild and the City created Building Forward LA; an effort to encourage buildings of all types to integrate advancements and innovations in design, engineering, and construction. The initiative envisioned how Los Angeles could design and build the city’s future buildings with resilience and sustainability at the forefront.

Working with the American Institute of Architects – LA, US Green Building Council – LA, Structural Engineers Association of Southern California, the NOW Institute at UCLA and the A + D Architecture and Design Museum, the process embarked on a two stage research and design process, modeled after Rebuild’s work in the Hurricane Sandy region.

The process began with an industry event at the A + D Museum in March 2017, convening experts and practitioners around the aspirations of building a more resilient and sustainable Los Angeles. Following the kick off, a four-month collaborative research phase commenced to seek input from experts of the built environment on identifying and prioritizing potential challenges to building policies and processes. Four additional public conveyings brought experts together to discuss:

1) advanced buildings and perspectives from within LA;

2) advanced buildings and perspectives from U.S. and abroad;

3) new technology and materials as they relate to advancing living buildings, particularly around energy, water and seismic; and

4) sharing the City of LA’s perspective on building codes, processes and policies.

This phase allowed Los Angeles professionals to discuss issues they face and provide the city and BFLA partners with a true understanding of the opportunities to create more resilient and sustainable building policies.

In addition to these large public events, BFLA partners met with numerous individuals and organizations in smaller group settings, board meetings, and one-on-one sessions. Having the support of the Mayor’s Office and staff encouraged broader participation among these key actors for examining building policies and processes. To gain insight on the city’s perspective, the Mayor’s Office engaged with several city departments on behalf of the partners including the Department of Building and Safety, the Bureau of Engineering, the Department of Water and Power, the Los Angeles Fire Department, the Department of City Planning, and the Bureau of Sanitation. Both City Agency and public perspectives informed the final recommendations.

The findings of the research phase were utilized to uncover impediments in current building regulations and ideas for enhancing opportunities to advance sustainable and resilient buildings. This information and understanding was used to create a set of recommendations.

Once the primary public engagement concluded, the city and partners held a one-day session to take the information gathered and organize the learnings into key themes which became guiding principles and objectives for potential recommendations. These components were then utilized to design a series of recommendations and case studies that were presented to city agencies and the public for feedback before they became final. The public feedback on the recommendations was through a sixth and final engagement event, which occurred in December 2017.The City of Los Angeles and Building Forward LA partners presented the draft recommendations to the public and industry experts for final feedback. The City and BFLA partners then incorporated the  feedback from the public and city agencies into final  recommendations. With over 365 people attending the public events, representing over 200 different organizations and firms, the initiative reached a wide audience of practitioners and relevant industry experts. The project brought the professional communities of architects, engineers and designers together to interface with city government, which had not previously been done in Los Angeles. 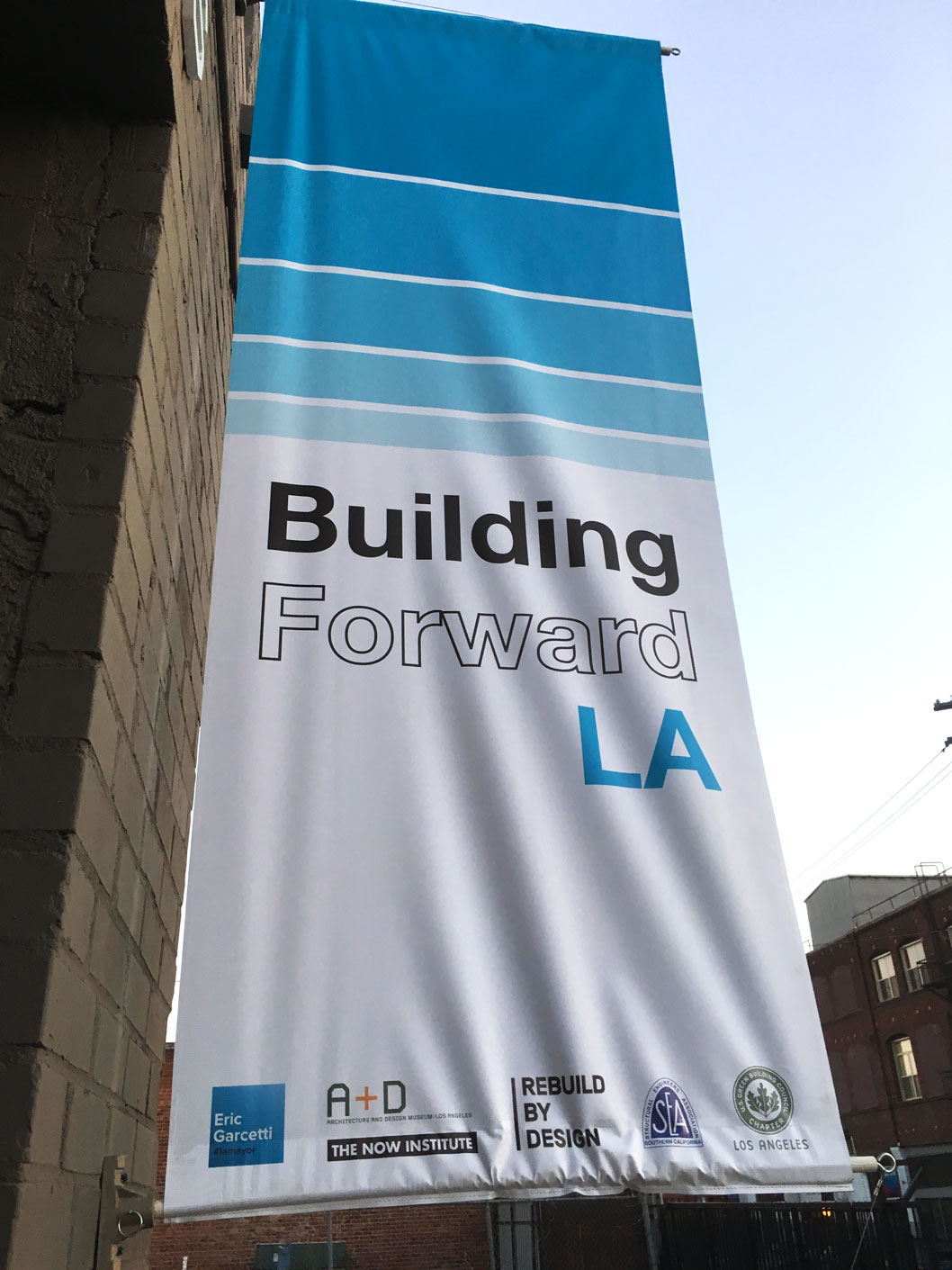